DEFER has been an integral part of the early graffiti art movement in Los Angeles since the mid 1980’s. He is adept in working in various mediums such as acrylic, spray paint, various inks, oils, water color etc. Defer is well known for expertly rendering beautifully complex letter-forms. His works on canvas have been displayed in various museums and galleries including “Street Cred” at the PMCA (Pasadena Museum of California Art) and “Bridging Homeboy Industries” at OTIS College of Design’s Ben Maltz Gallery. Recently his work was included in the “Liber Amicorum” project which is archived in the Getty Research Institutes special collections. Defer’s influence on the visual language found in the City of Angels cannot be overlooked. 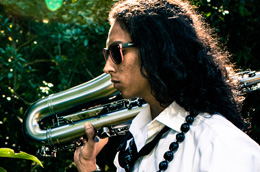