Since 2004 Know Hope has been showing his work in galleries and exhibitions worldwide, but mainly outdoors, in its natural, urban setting. The artist deals with the ephemeral aspect of not only the genre itself, but also as a subject – the need of momentary connections in an everyday reality, and the common denominator that is the human struggle.

Through site-specific installations, murals and paste-ups, Know Hope attempts to create situations that happen in real time, and are accessible to the public on a day-to-day basis, with intentions of creating some sort of a dialogue. In his work, he often uses found wood, vintage frames and aged paper with intention of referencing the ideas of temporality and the translucent habits of memory, by using and adding on new moments to old memories, replacing the images in the frames and reappropriating old cabinet doors and panels. His instantly recognisable street pieces regularly use the same workmanlike characters wearing what appear to be prison fatigues. Based in Tel Aviv, Israel, he has created a number of controversial works in his home city examining bilateral conflict and the quest for identity.

Know Hope has garnered much attention over the past years with his outdoor work and installations as well as successful exhibitions in Europe and the US. He has both group and solo exhibitions and other special projects scheduled in Tel Aviv, London, Los Angeles, Vienna, and South Africa. 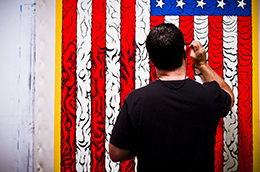