Born in Juarez, Mexico, and raised in Dallas, Texas, Marka27’s foray into the art world began in the city’s streets mastering the art of graffiti. Advancing to earn his BFA from The Museum School of Fine Arts in Boston, Massachusetts, Marka27 became a household name for his “audio canvas” series and elaborately executed installation art and murals. He has been featured in many lifestyle magazines/ books such as Graffiti Planet, Burning New York, I am Plastic Too and made the cover of “Flux-Designer Toys.

Marka27′s artwork has been exhibited in high end galleries through out the east and west coast such as, Gallery 1988, Think Space, La Luz de Jesus, The Mills Gallery Boston, and the Isabella Stewart Gardner Museum. His artwork has been shown along side established artists, Futura, David Choe, Ron English and Gary Basemen. Marka27 also sold artwork through the world renowned Freeman’s Auction House.

Marka27 has been commissioned to collaborate artistically by some of today’s most well know brands such as, Levis, Pioneer, Scion, Converse, Heineken, VH1, Disney, New Balance and Kidrobot.

Largely inspired by multi cultural influences, Marka27’s art has served as a reflection of his varying interests. Beginning with iconic musical (and specifically hip-hop) figures, Marka27’s passion to infuse empathy into his art gave way to birthing magnificent and politically-charged masterpieces, some of which still grace both Boston’s and Los Angeles’ city walls today, as well as San Francisco and Montreal, Canada.
Now based in New York City, Marka27’s quest for artistic exploration continues. Breaking beyond the canvas’ confines, he created to critical acclaim the MIniGods: Givers of Divine Sound©, a high-end line of designer vinyl toy speakers. His latest body of work, Neo-Indigenous©, slated to showcase in early 2012, marks a shift in his cultural consciousness. This body of work is a deep look into indigenous ancient aesthetics fused with street art, pop culture, and personal life experience. 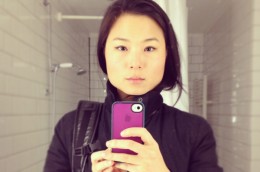 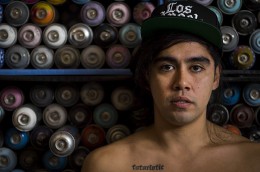