How did you catch ‘the bug’?

I wish I knew to be honest, I just Always loved to draw. And started noticing graffiti as a child, and started drawing my interpetation of it soon after. During high school, nothing mattered but tagging on shit at the school. I didn’t care about parties, girls, sports. none of that shit. Well, I would didtch a lot and ocasionally some girls would holler at me, and i would let them get to 3rd base or so, but i never persued them. Vandalism was all I cared about, and when i actually did go to class, i just drew pieces, and tagged on all my paper till i ran out. I lived close to the school, so I would take the babes there, and then go back to write on shit. I did everything in the day time because my Mom had me on lock down because she knew i would go out writing if i left after dark. Which eventually got me caught up as a juvenille. I have always just been infected with the bug since I was young. I came from a small town, and wanted to get up, get out, and get some.. haha

When did you hook up with MSK?

In 2001 I was 18 years old, or so, and I moved to Mid City Los Angeles with my boy Jorge, and his brother Diego, and this real slimey character from back home.He kinda was Missing in action the whole time any way, so it didn’t really matter. It was the four of us in a studio, and all I did was steal, Tag on shit, eat top ramen on bad days, and holler at Women.. I painted a couple times by my self, but nothing too crazy. I met Gkae at an art show on Melrose, and LaBrea, and soon there after I met Eklips. I called Eklips to try to sell him designer jeans, and north face jackets periodically, and he would buy them. I am not sure he even needed the shit, i just think he knew i was broke… He always looked out for me, and eventually envited me to go to Ensenada with Him, and a few other members of the crew. and off I went. I remember being in this van that we rented, and we picked up Push, and he got in and looked at me like “WHO THE FUCK IS THIS DUDE??” hahah it was priceless. I was a young dude, and these dudes schooled me to a lot of shit, I always related with them on shit, and the bond just grew. I got in the crew in 2008, and continued to paint. Push continues to pocket dial me, it will never end.

From an interview with Trav on spraybeast.tumblr.com. 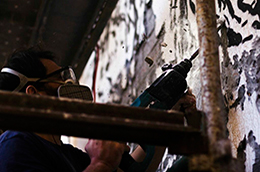 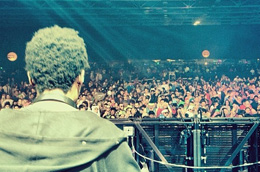 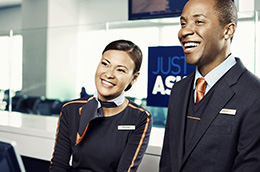